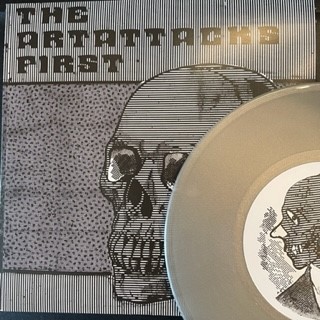 On 16th January 1979 the Art Attacks released their second and sadly posthumous single 'First and Last' on Fresh Records.

The A side was "Punk Rock Stars" and featured the drumming of Robert Gotobed from Wire. The B side was "Rat City".

The artwork was designed by Edwin Pouncey aka Savage Pencil, lead singer of the band.

After they split Edwin Pouncey, Marion Fudger and Steve Spear would form The Tagmemics who released one single 'Chimneys' on the Index label in 1980.

Unquestionably a punk rock classic, the single is now highly collectable, has featured on many official and unofficial punk rock compilations and has been long overdue an official reissue so in 2022, in conjunction with the band, Overground Records have released a limited reissue of 500 copies on silver vinyl which losely reproduces the original sleeve and label artwork.
https://overgroundrecords.co.uk/produc ... nd-last-7/
Top
Post Reply
1 post • Page 1 of 1