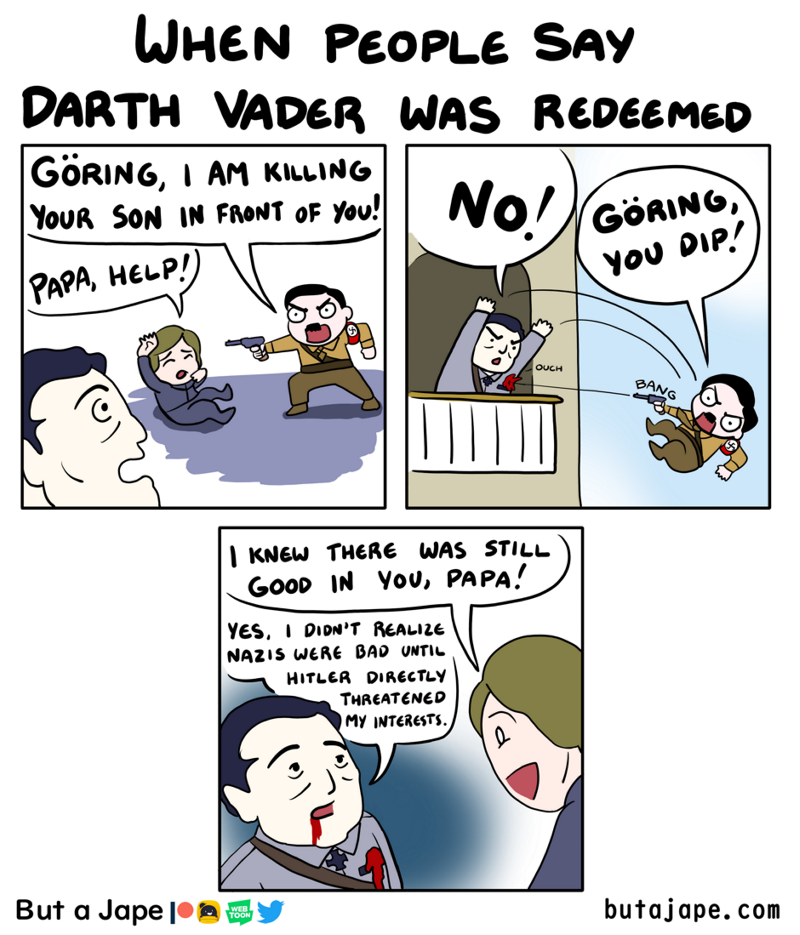 Back off, or I'll blow the roof off—with sound!
Top

Hmm, that's thought-provoking.
Look, you have to establish context for these things. And I maintain that unless you appreciate the Fall of Constantinople, the Great Fire of London, and Mickey Mantle's fatalist alcoholism, live Freddy makes no sense. If you want to half-ass it, fine, go call Simon Schama to do the appendix.
Top

It's almost like people who treat these movies as delivering serious life lessons might be deluding themselves.
Back off, or I'll blow the roof off—with sound!
Top

As tends to be the case on long weekends, one channel or another does a Star Wars marathon. Just watched Rogue One and, god damn, it keeps moving up my list of SW films. It's still fundamentally fanfic and unnecessary pothole filling in terms of the wider story, but the execution and mood—shit is way darker yet more romantic than any other SW flick—and is so damned good. Heroism and sacrifice of the unheralded. The original trilogy has a decades-old hold on me, but taking a step back, I could make an argument that Rogue One is the best of the films.

edit: A New Hope is on now. I'm sure I've said this before, but Sand People really sounds like a slur. Especially when they're also known as Tusken Raiders, which I assume is an occupation of some Tuskens. If you're referring to Tuskens as Sand People, yea, you're a bigot. Looking at you, Obi Wan and Luke, fucking religious nuts.
Back off, or I'll blow the roof off—with sound!
Top

The last hour of Rogue One is pretty much some of the best space combat ever shown in sci-fi films.
”INDER LOCK THE THE KISS THREAD IVE REALISED IM A PRZE IDOOT” - Thomas Jefferson